Yes, well this is a bit odd, isn't it? First rats, then mice & now even ferrets! What a combination of animals for someone to own under the same roof, let alone be breeding.

I first met ferrets through a friend, whose family has been breeding for generations (since their first importation in the 1940's), as a kid. He started my love & adoration, as his ferrets were calm & affectionate, but also playful & fun to be around.

I researched & waited for years for the "right" ferrets to come to me & it wasn't until March 2010 that I found those ferrets in a litter of kits, a Dark Sable jill (Scarlet) & two Sable Mitts, one jill (Missy) & one hob (Lucien), from hunting lines towards Armidale, NSW, plus later collecting a "True" Albino jill (Vivian) from hunting stock at Maclean, NSW.
By December 2010, under especially strict guidance, I had three litters. Missy & Scarlet had been paired to an unrelated working hob from the Northern edge of Grafton, NSW, called Elvin, a Pink-nosed Sable, whereas I had paired Lucien & Vivian together. None of my jills bit me or abandoned their litters & I was able to handle the kits from day one. I kept the majority of litters by choice, though I sold a few as far North as Tweed Heads & as far South as Port Macquarie, all on desexing contracts.

I invested in an Albino hob (Theodore) from Harrington, NSW, in November, 2012, & then two Dark-nosed Sable jills (Ingrid & Esmerelda) & a Sable hob (Roger) from Inverell, NSW, in January, 2013. Roger was later desexed, as Ingrid came to me already pregnant to him from their previous owners & I retained the darkest hob (Alvin) for future breeding. 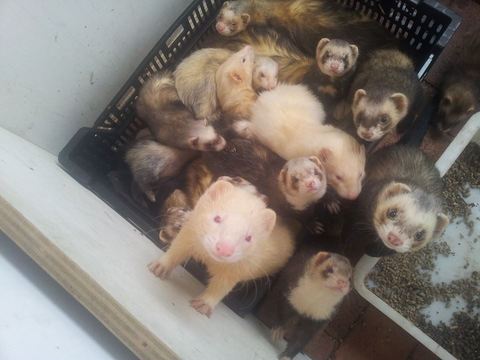 The Horde crowding the doorway to their enclosure
All my breeding aims towards breeding pure Polecat type ferrets, also known as Dark-nosed Sables, & "True" Albino ferrets.
I select my breeders based on health, temperament, type, functionality & colouring. I will not breed with aggressive animals or animals that are unstable in temperament. I do not breed with "fancies" such as Silvers, Dark Eyed Whites, Blazes or any abnormalities (deformation) of structure.
A current, my line carries only Mitt & Chocolate, possibly Cinnamon also, but all will be removed from the genepool in good time.

Some of my ferrets are worked, meaning they have been used for hunting small game such as rabbits or mice (I do not live feed, I go out to farms & hunt vermin from feed sheds or paddocks). This does not make them more aggressive, it gives them a job & they enjoy it.
The ferrets are kept in cages, though I try to have them out together for up to 8 hours in a day. They are fed a Franken Prey & Whole Prey diet, outlined on the Holistic Ferret Forum 60 ( http://holisticferret60.proboards.com/ ).

My ferrets are handled daily & are constantly checked for injury or illness. I keep records for each ferret that passes through me, either as one of my breeding stock or as a rescue or surrender. They are all microchipped, vet checked (annually or if rescue, as soon as possible after arrival), treated with Revolution, litter trained & bite trained. Once a week I cut their nails & once a month I clean their ears.
I do not bathe my ferrets unless required (eg. get some poop stuck in their fur), as frequent bathing dries their skin & coat out, as it strips the natural oils from their bodies & causes the skin to become irritated & crack, often times this results in an infection itself. However, my ferrets do enjoy splashing in plain water without the soap or shampoo, rubbing themselves dry in warm towels & napping in the sun.

I frequently take them down to my local river for a walk & a splash when time permits.

Potential clients are welcome to contact me in regards to my ferrets & arrange a "Meet & Greet".