So as you may have realised, this is where all my ferret litters will be placed. As such, because I'm only a new ferretry, I won't have many litters to begin with. As I will only breed a very limited amount through out the breeding season, I'll not have many litters on this page for a while yet.
None the less, here they are & I hope you enjoy.

Each litter will be produced to aim towards the sole production of Polecat/Sable & Albino ferrets. Any other variants will slowly be removed & no longer available.

Please be aware, I have a  waiting list system in place for clients wanting kits & all kits are contracted for desexing at 18 months old & are not to be bred with, unless arrangements for breeding stock have been made. If you wish to adopt one of my kits, please contact me.
Ferret Kits are $300 each or $500 for a pair. Payment is to be made via cash in hand or direct bank deposit (this is preferred). Payment plans are available. To reserve a specific kit, it is required clients pay a non-refundable $50 deposit fee.

Born 29th of December, 2013.
Parents: Theodore is my super cuddlesome snuggle buddy. He is on of the most affectionate hobs, even in rull rut, without a mean bone in his body. He is a large & stocky hob, coming from Albino & Sable background of working ferrets. He is an untried hunter, however his focus is strong & he is responsive to recall. I hope to take him down for rabbits in the Autumn of 2014. This is litter will show me what Theodore may or may not have hidden in his genes.
Vienna is a high spirited jill, much like her mother was. She is not a massive jill, but she is strong & muscular, with great hunting capabilities. She has no bite for humans & is a particularly affectionate jill, also being very bold & forth coming. She is sociable & gets along easily with other ferrets.
Expectations: Darknosed, Pinknosed Sable/Polecats & Albino.
Results: 7 kits born, 4 Albino, 2 Pinknosed Sables & 1 Darknosed Sable
Boys: 6
Girls: 1

Born 30th of December, 2013.
Parents: Alvin is only a young hob from a previous litter (Roger x Ingrid). He is a spritely man, though he still needs to mature further, he looking to be a very promising hob with great potential. A good dark Polecat hob, from Polecat/Sable backgrounds from working/hunting lines. Yet an untried worker.
Scarlet is one of my jills who I've bred previously, this being her second & final litter. She is a clever jill, holding top rank with her sister & is an effective mouser. She does, surprisingly, have Red Eye Shine (RES), not often seen in Dark Polecat/Sables, but she also carries Mitt & comes from predominantly Mitt background.
All kits will be given the prefix of Guardians Gathering.
Expectations: Polecats/Sable, dark to pink nosed, maybe Mitt Sables.
Results: 5 kits born, all Darknosed Sables.
Boys: 4 hobs.
Girls: 1 jill. 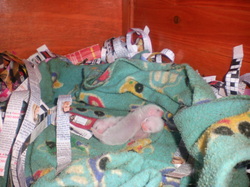 A rather unplanned litter born on 31/1/2013.
Parents: Roger is a real cool dude, with a very relaxed demeanour & happy to just sit & cuddle. He is a nice ferret & his kits have turned out lovely.
Ingrid is a gorgeous dark Polecat jill, with a good form & a even temperment. She is beautifully dark, but above all, she is healthy & very spirited. She is a focused hunter, as I've since used her for one mousing trip & she performed well.
Both Roger & Ingrid come from hunting/working lines in Inverell & were picked up from the same place, however, they come from two different breeders, though no doubt, they likely have some distant relations to each other. Roger, so far, lacks drive for the hunt & focus, prefering to sit out, but Ingrid is quite an exceptional mouser.
All kits will be given the prefix of Guardians Gathering. Please check the litters page in regards to ferret litters
Expectations: Polecats/Sable, dark to pink nosed.
Results: 3 healthy kits born.
Boys:
1 x darknosed Polecat/Sable hob - retained
2 x pinknosed Polecat/Sable hobs, one darker & one lighter - both available

A third litter born on the 19th of December, 2011.
Parents: Lucien is my stinky, slinky, slothful cuddle toy & play thing. He literally just flops over to be cute & lovse to play, explore & get into general trouble. Such an even tempered hobb, he's large & robust, so here's hopes he'll throw some good kits.
Vivi is the psycho blonde, however she's remained very plump for a long time now & has gotten particularly snuggly of late, her boisterious & insane teenage phase having passed. She's probably my most attractive girl & I expect her to make a good mum.
All kits will be given the prefix of Guardians Gathering. Please check the litters page in regards to ferret litters
Expectations: Not sure what to expect, hopefully some interesting kits & maybe some display of what Vivian is under her white.
Results: 8 kits born, 7 survived.
Losing 1 kit after two days, reasons unknown, the remaing 7 grew very well & very quickly. There was complications at 7 weeks old, when Vivian started to chew the ears off the kits, I which removed her & continued their rearing by hand. They resulted in very loving, affectionate & humanised kits, though they were reintroduced to the other ferrets to ensure they are ferret aware youngsters.
Boys:
1 x Silver Mitt Sable - Adopted
1 x Dark-nosed Sable - Adopted 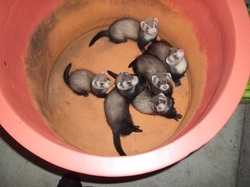 My very first two ferret litters. Born 1st December, 2011.
Parents: Scarlet & Missy are sisters, being two of the sweetest ferrets I have come across. Both girls will give you a lick on the cheek & settle for a cuddle, but they definately go full throttle when they want to play. Neither girl bites or carries on like a spoilt brat, both are harness & litter trained & come to their names.
They were paired to a Sable male, called Elvin, from a breeder local to me who happened to have a suitable male with an excellent history & plenty of manners. The male had been bred many times before & produced excellent kits, also being quite a dark ferret in himself.
Expectations: Not sure what to expect from these guys, only that I should hopefully have kits that are healthy & friendly. As I don't know if anyone carries Albinism, I dare say I'll have an entire litter of Sables, some dark & some light, some Silver Mitted & some not. Not bothered either way, it'll be a great lot of kits between these three.
All kits will be given the prefix of Guardians Gathering. Please check the litters page in regards to ferret litters.

Results:
Missy had 6 kits initially, though one was dead by the next morning being a runt & rather underdeveloped compared to it's siblings. It appears there is one darkerish Sable & the others look to be variants of Sable, with 2 males & 3 females, however stilling being quite young & I can not yet tell for certain.
Boys:
1 x Silver Mitt Sable - deceased
1 x Pink-nosed Sable - Staying

Scarlet had a mere 3 kits, which are huge & without issues. It appears all 3 are female, one being a Silver Mitt & the others darker Sables. One kit had an eye forceably opened by Scarlet accidentally just shy of 1 week old, however it appears to be developing fine & well, so hopes are that it shall be okay & able to go to a new home when the time comes.
Girls:
1 x Pink-nosed Sable - Available
2 x Dark-nosed Sables - 1 staying, 1 deceased.

Unfortunately, whilst I was at work & no one was at home, one kit from Missy & Scarlets litter died from heat stroke at about 9 weeks old. I was quite devestated, however the remaining kits & adult ferrets were fine & cared for.