My first & primary line is called Standard Rat Line 1 (SRL1). It is the original & very first line of rats here. It started out with Rico, Holly & Floss in 2008, & have since continued on from their children, with a spot of new blood (Alibaster & Lemmington) added into the gene pool in 2010 & again in early 2013 (Rat-Lee), to improve on type for showing, but also to renew other genes in the line.
Typically, I concentrate on Mink & Dove with this line, but I do get Black, Buff, Mink Champagne & normal Champagne. I do have the albinism gene lurking in the genepool, so sometimes I will throw an Albino or two.

I keep particularly detailed records of this line as it is the oldest & my most favoured line. It has been bred specifically for health above all else, to show this fact I have only have a handful (5 cases) of benign tumours pop up in males & females that have been 2 years old or older, the rats typically live to be 3 or 4 years old & with limited cases of respiratory infections in young or old animals.

Future Work
I have other goals looking towards Black Eyed Whites, "Spotties", Black Selfs & a line of Downunders, along with straight Blue & Silver Selfs, but those are still being followed through & are not yet established lines. In another 2-3 years, I hope to have them into an established line of consistant health, form & temperment alongside SRL1.
The foundation rats for these new projects are Mushroom Rodentry Bubble Gum Bliss (Standard Blue/Lilac Berkshire), Mushroom Rodentry Skittles (Standard Black Downuder Berkshire), Lyn (Standard Black Blazed Capped) & Vertigo (Standard Black Downunder Hooded). I also have a Rex Black Berkshire doe who will be paired to a Standard Black Berskhire buck. 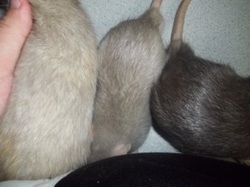 Standard coat: These have sleek, smooth coat, with longer guard hairs interspersed throughout. They can appear to have quite a lustrous shine quality, some more than others, & are a common coat to be found.
There is some variation amongst Standard coats, some are glossy looking & others are quite dull, some are very soft to the touch whilst others are rough. All depends on the health, age, diet, gender & grooming of the individual.

Black - This is an easy one. Australia doesn't have true 'black' colouration, we actually have silvered blacks which have white hairs flecked through the coat. The black colouring is just like that of a black dog or cat.
Mink - Pretty simple, Mink is just a very strong steel or storm grey colour (recessive gene). I breed a relatively dark shade of Mink, so mine are darker than most other strains, but I happen to love the colour.
Dove - Should be a silvery grey colour. The dilute version of Mink when you give it the Red Eye Dilute gene.
Champagne - As the name says, it's a Champagne colour or should be a very light cream, sometimes hard to tell unless compared to a white rat. Another dilute version of black, except using the Pink Eye Dilute gene (recessive trait).
Albino - a pure white rat.


All the mentioned colours are available in most markings & their varitions. Please read the Markings section below.
I typically have Black, Mink, Dove & Champagne in this line, but I do produce the other colours due to some outcrossing. I do not mind these other colours, but don't aim towards them. 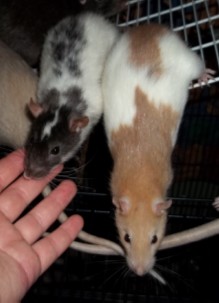 Two variations of Hooded
Self: Probably the easiest of all markings, for Self rats have no markings at all. They are full coloured rats, with no white socks or mittens, belly or facial markings, markings of the tail or any points of white at all. They can be any colour, but just no markings.
Genetically, it is represented as: HH.

Berkshire: Probably one of the most favoured marking, Berkshires, Berks or Berkies, are any coloured rat with white mittens, socks & belly. Some may have blazes, making them a ‘Badger’, or headspots, but neither are necessary for a good Berkshire. The Berkshire marking comes in many variations, from belly spots referred to as Irish, to blotches & patches referred to as mismarked, to evenly marked, full white bellies.
Genetically, it is represented as: Hh.

Hooded: Likely the most common & variable marking available. Hooded rats come in various colours & coat types. These are a rat with a coloured head, shoulders & a stripe of colour down it’s back, but due to being so variable, their markings differ from rat to rat. Some of them don’t have the solid stripes, some are mismarked & have blotches or spots or uneven markings, some are Barbacks, which have the coloured head & shoulders, but nothing more, or Capped, which have only a coloured head. All types of Hooded are variable, & they can be quite unique.
Genetically, Hooded is represented as: hh.

The Wild Type line originated from a feeder breeder who has a wild rat get into a tub of Silver Fawns & I have since acquired a handful of descendants. I have since bred these & have produced a number of particularly nice rats, nice enough that members of the Queensland Rodent Fanciers & New South Wales Rodent Fanciers societies have fallen in love & taken some for their own breedings.
Typically in Berkshire or Hooded, aims towards Self.

Agouti - A strong brown colour, each hair shaft has got bands of yellow, brown & black, which gives a ticked appearance. This is the same colour as wild rats have.
Silver Fawn - A pale orange colour, the Pink Eyed Dilution version of Agouti.
Albino - a pure white rat.